The affordable Amazon Halo View — round two of Amazon’s original Halo wearable — drops the weird, always-on microphones, adds a color screen and comes in at a lower price of $79.99. But it’s also vying to command that coveted space on your wrist, which may already be taken up by the Fitbit Inspire 2, our top pick for a fitness tracker.

We spent a week putting the latest Amazon tracker through its paces, complete with runs, indoor cycles and yoga, and tried out the $3.99-per-month subscription health service, which we ultimately concluded is the real star. At $79.99, we think the AMOLED color screen, sleek design and addition of video workouts and nutrition services make it worth a look, especially for those motivated to kick-start their activity for less.

Amazon’s Halo View is best for someone seeking a lower-cost Fitbit alternative that can handle the basics and provide workout guides.

The who, what and how

Who this is for: The Amazon Halo View will appeal to anyone looking for a lower-cost Fitbit alternative. It’s simple, efficient and boasts advanced health features with the Halo membership.

What you need to know: The Halo View ditches the creepy and controversial onboard microphones of the original Halo band and opts for a device that’s similar to competing fitness trackers. It also packs in all the expected features like heart rate, blood oxygen and activity tracking, and you’ll get the membership free for a year.

How this compares: The Halo View is most like a Fitbit Inspire 2 or Charge 5, with a sporty, slim rectangular design, highlighted with a color screen — an improvement over the black-and-white screen on the Inspire 2. While the Fitbit trackers hit a home run with all the core features out of the box, Halo View puts body scans, tone analysis, workouts, guides and recipes behind a paid yearly membership.

The Halo View is not reinventing the wheel with its thin, rectangular build and color touch screen center, though it is a departure from the screenless Halo band, putting it more in line with the popular Fitbit trackers. The color screen also makes the View more engaging than that black-and-white display on the Fitbit 2.

The rectangular hull holds a myriad of sensors for activity tracking, while the rear contains the main sensor array to measure heart rate and blood oxygen. It’s also home to pins for charging and two buttons for swapping bands. The pre-attached band comes in three colors: Active Black, Lavender Dream and Sage Green.

Like the original Halo, the upgraded View is plenty comfortable on the wrist and again, extremely similar to the Fitbit Inspire 2. It was easy to get used to, though we did have some trouble getting it to snap around our wrist to properly situate the sensor. A looser band resulted in some difficulties with blood oxygen monitoring. 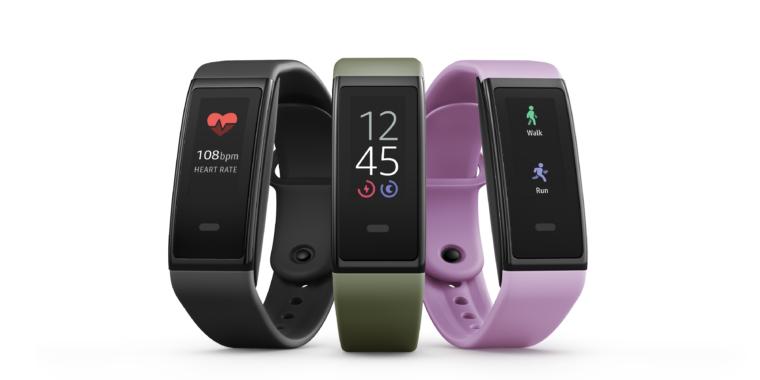 The View uses a proprietary charging clip and takes just over two hours for a full charge. We’ll note that it sometimes took us a few tries to dock it successfully, though we got close to the promised seven full days of use on one charge, running out about 12 hours short. We’ll circle back on this after a few more weeks of testing, though as it stands, it still falls short of the Fitbit Inspire 2, which offers a class-leading 10 days of use on one charge.

The chillier temps in New York City kept us from testing the Halo View in a pool or the ocean, but it is swimproof and water-resistant up to 50 meters. We did, however, wear it in the rain and even showered with it, both resulting in no issues. This also matches the resistance and durability of nearly all Fitbit trackers.

As we broke it down with Halo last year, Amazon deploys a point system for tracking your overall health — all now conveniently displayed on the new touch screen. Yes, they show you steps and heart rate along with calories burned, but they also let you reflect on your overall health and body based on hitting 150 points per week (à la the American Heart Association). This can also be adjusted depending on your own fitness and health goals and includes reminders to encourage you to get up and move if you’re stationary — similar to activity rings from the Apple Watch.

Most fitness trackers these days go beyond just steps, calories and active minutes. Fitbit’s Sense can take an electrocardiogram (ECG) along with blood oxygen, heart rate and stress sensing. But the Halo View sticks with the mission critical features — it’s equipped with skin temperature, heart rate and blood oxygen sensors. We appreciated that the heart rate is as accurate as the original Halo and in line with other leading devices like the Fitbit Inspire 2.

The best fitness trackers of 2021

Blood oxygen was more hit or miss because the band needs to be tight and your arm needs to be still. It initially failed a few times, but the result eventually yielded closely to a stand-alone pulse oximeter and other, pricier fitness trackers.

You can also choose from a variety of watch faces and decide which notifications you’d like to get, including texts. The larger, color screen also makes it easier to read notifications on than the Inspire 2.

Thankfully, the Halo View did drop the microphone, which was included to analyze your mood on the original Halo Band, but tone analysis is still part of the app and can measure your voice in real time on your smartphone. It’s not our favorite feature, considering it kept insisting we were angry. (This editor is jolly — just ask his co-workers.)

Similarly, body scans are still offered in the app and entirely optional. As we wrote in our previous review, the body scan functionality feels like something out of “Black Mirror” and the sci-fi future. And we didn’t love how it scans your body in minimal clothing for a mass body index number. It’s not for everyone, and thankfully, it’s completely optional.

As with the original Halo, the View shines when paired with the upgraded membership, which now includes those workouts, body scans, health plans and nutritional guides, among others. Without it, the Halo View is a basic fitness tracker.

We’ve only sampled a few of the classes. But similar to Apple Fitness+ or Peloton, we found a mixture of instructors, and we’re especially fond of the varied meditation instructions, which let you dive right in, even as a newbie. We have also been enjoying the strength and yoga classes.

All signs also seem to point to a further expansion of classes, and on a more exciting note, Amazon will be integrating live, on-screen metrics from the Halo View during workouts in the coming months. This would be nearly identical to the Apple Watch integration with Fitness+ and one that we’re eager to try.

In comparison, Fitbit’s Premium Membership offers access to workouts and similar guides. But we believe Halo’s approach is more personalized, aiming to suggest and match you with courses that best fit your needs.

If you’re in the market for an affordable fitness tracker, the Halo View is worth a look at $79.99. It offers accurate tracking and comes with a compact build and a color touch screen to view core data points. However, it fails to surpass the value or features of the Fitbit Inspire 2, our top pick for a fitness tracker.

Thankfully, we can say goodbye to the original Halo’s onboard microphones, which will calm many people’s privacy fears, though the now optional tone analysis is still in the app, along with body scans. And for just $3.99 per month after a free year, we think the fitness service can help you live an all-around healthier life.

Tags:  how to pick a fitness watch

Grab This Amazing Waterproof Fitness Tracker for Under $30 at Amazon