Hot on the heels of the Galaxy Z Fold 2 announcement yesterday, Samsung has just announced several brand new products across different categories at its “Life Unstoppable” virtual event. The list of the products announced today includes the Galaxy A42 5G smartphone, Galaxy Tab A7, Galaxy Fit 2, and Wireless Charger Trio. Most of the product details, including pricing and availability, were not mentioned, so we expect to learn more over the coming months.

Samsung is positioning the Galaxy A42 5G as an affordable 5G-enabled smartphone in the Galaxy A series. Succeeding the Galaxy A41 that launched in May this year, the A42 5G will feature a 6.6-inch Super AMOLED display with a waterdrop notch. The phone will have a quad-camera setup on the back; however, the company didn’t reveal much about the exact hardware. Consequently, details about the SoC, battery size, charging speed, software, etc. also remain under the wraps for now. Samsung says the Galaxy A42 5G will be available in Europe in November, starting at €369 (~$435).

The new Galaxy Tab A7 will take charge as the latest affordable offering in Samsung’s tablet portfolio. The leaked renders of the tablet surfaced just yesterday, and looking at the official renders, they were right on the money. In terms of specification, the Samsung Galaxy Tab A7 offers fairly modest internals. On the front, you have a 10.4-inch TFT display with 2000 x 1200 resolution, an unspecified octa-core processor on the inside, 3GB of RAM with either 32GB or 64GB flash storage, an 8MP rear and 5MP front cameras, and a 7,040 mAh battery running the show. The tablet also packs four Doly Atmos speakers, a 3.5mm audio jack, and a USB Type-C port. You can view the rest of the specs here. The device is expected to be made available in Europe in November, with the Wi-Fi variant costing €223 (~$270) and the LTE variant costing €282 (~$333). 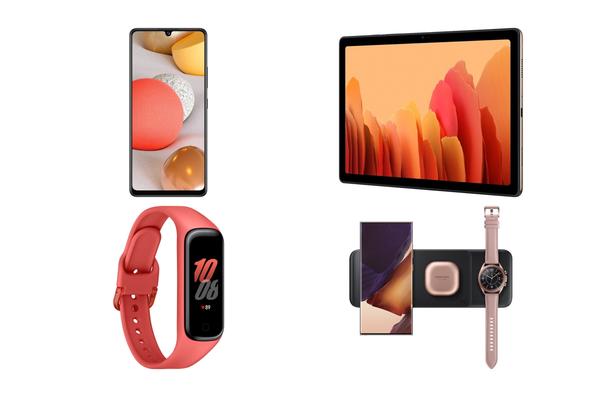 The Galaxy Fit 2 is the brand new entry in Samsung’s fitness tracker portfolio. It’s a direct successor to the last year’s Galaxy Fit and brings along many improvements, including a sleeker body, improved battery life, and an increased set of fitness features. The Galaxy Fit 2 sports a 1.1-inch color AMOLED display and has a virtual button at the bottom. The band has up to 70 different watch faces to choose from and features a larger 159 mAh battery, which lasts up to 15 days, according to Samsung. Just like other fitness trackers, the Galaxy Fit 2 can also measure your heart rate, your sleep quality, track footsteps, and count calories burned. Samsung hasn’t yet revealed any details about the pricing and availability of the Galaxy Fit 2.

Pre-order the Samsung Galaxy Tab A7 from Amazon.in

Optica Foundation Announces a US$10,000 Scholarship for Women in Optics