Location
Home → BLOG → OnePlus 10 and OnePlus 10 Pro: Everything we know about the latest flagship smartphones

OnePlus as a brand has undergone quite a lot of changes lately. What started off as OPPO’s spin-off went on to become an independent brand hugely popular among enthusiasts. And now, it’s back to where it all began. OnePlus merged into OPPO recently and the two brands are now sharing the same R&D team. OxygenOS has also been merged with ColorOS — a move that not a lot of OnePlus users are appreciating. While there are a lot of changes taking place, the core philosophy of OnePlus over the past few years has remained the same. The brand focuses on speed and that can be seen on almost all OnePlus phones. The OnePlus 9 series combined that with major camera improvements making the OnePlus 9 Pro one of the best Android phones to buy. Now, it’s time for the OnePlus 10 Pro to carry on this same legacy.

The OnePlus 10 Pro has been officially launched in China with the global release set to take place a few months later. Unlike previous years, though, we only have the upper-tier OnePlus 10 Pro this time with no mention of the vanilla OnePlus 10. That being said, here’s everything you need to know about the OnePlus 10 Pro if you plan to buy the smartphone whenever it launches globally.

Where is the OnePlus 10?

That’s a tricky question to answer. Generally, OnePlus launches two phones as a part of its flagship series every year. Last year, we had the standard OnePlus 9 and the OnePlus 9 Pro catering to two different price points. Both were flagship devices, but the Pro variant included some additional features to justify the moniker. This year, though, OnePlus only announced the OnePlus 10 Pro with no mention of the standard OnePlus 10.

It could be that OnePlus is reserving the announcement for the global launch of the OnePlus 10 Pro in a couple of months. The decision could also be due to the worldwide chip shortage leading to not enough parts to manufacture and sell two different phones simultaneously. Whatever it is, we should know pretty soon. Instead of the regular OnePlus 10, the Indian market is getting the OnePlus 9RT as of now which was also initially launched only in China.

The OnePlus 9RT features the Snapdragon 888 chip with triple cameras, a 120Hz display, and the same 65W fast charging as the other OnePlus 9 series of phones. While it doesn’t have the latest chipset and Hasselblad cameras, it can still be a decent flagship option at a price that’s not too high. We will update this section if we get any further info regarding the standard OnePlus 10.

As of now, the OnePlus 10 has been launched only in China with no official word about global availability. The phone should, however, make its way to international shores in the coming months. In China, the phone goes on sale on 13 January 2022 in three different variants.

Note that the prices in USD and INR are approximate and are not official prices. We will update this section with the official pricing and availability info for North America, Europe, and India as and when the phone is launched in those regions. 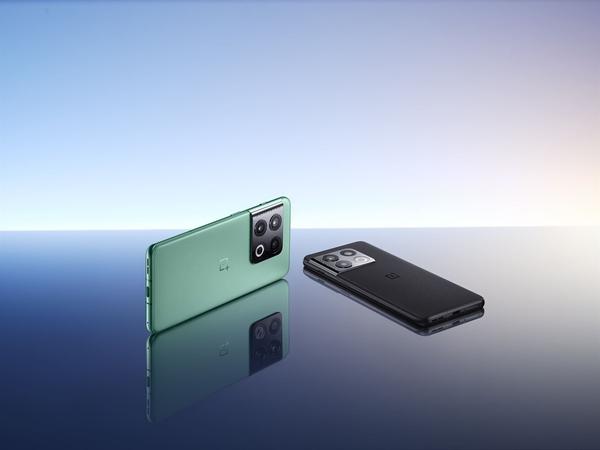 At launch, we have two color variants of the OnePlus 10 Pro in China — Volcanic Black and Emerald Forest. However, OnePlus is known to launch several new colors after the initial launch so we can expect more colors later on, including a rumored white variant. Maybe it’s reserved for the global launch?

OnePlus has generally played it safe in the design department with all its phones, barring the special edition phones of course, which always have something unique to offer. This time, though, the OnePlus 10 Pro looks quite unique and doesn’t look like anything OnePlus has done in the past. The three camera lenses on the rear are housed in a camera module that protrudes from the side and overlaps onto the back of the phone. This is similar to the camera module on the Galaxy S21 series. Of course, there’s a prominent Hasselblad branding on the module itself stressing the second year of partnership with the camera maker. It’s a pretty bold design compared to previous OnePlus devices and it’s a welcome move.

It’s a pretty large device given the huge 6.7-inch display but so was the OnePlus 9 Pro so no surprises here. Apart from the revamped back, everything else is pretty standard on the OnePlus 10 Pro. There’s a USB-C port at the bottom, a dual-SIM slot, the alert slider is retained, and there’s no headphone jack.

The OnePlus 10 Pro features a 6.7-inch AMOLED display with a QHD+ resolution. This is similar to the panel used on the OnePlus 9 Pro, but with some advancements. For instance, the display on the OnePlus 10 Pro uses LTPO 2.0 technology which is quicker at identifying the type of content on the screen to vary the refresh rate from 1Hz up to 120Hz. OnePlus claims that the panel was also color calibrated at the lowest as well as highest brightness levels. Not to forget, the display is curved on the edges and seamlessly integrates with the frame.

Other features like HDR 10+ certification and 10-bit color depth are present. This is a flagship display panel and is easily among the best you can find on modern-day flagships. The punch hole cutout for the selfie camera is retained on the top-right corner just like on the OnePlus 9 Pro.

Needless to say, the OnePlus 10 Pro resides in the flagship territory when it comes to the internals. Qualcomm’s latest and greatest Snapdragon 8 Gen 1 is what you’ll find at the heart of the OnePlus 10 Pro which ensures ultra-fast performance. All OnePlus phones over the years have emphasized speed and this one’s no different. The chipset can handle just about anything from multitasking to heavy gaming.

The powerful SoC is coupled with up to 12GB of LPDDR5 RAM and up to 256GB of UFS 3.1 storage. This combination ensures that even if you’re a hardcore gamer playing heavy titles like PUBG or Genshin Impact, the OnePlus 10 Pro should handle it with ease.

OnePlus partnered with Hasselblad last year to tune and optimize the camera performance — a department where OnePlus has been lagging behind for a while now. The cameras on the OnePlus 9 Pro were a step-up from previous generations but still weren’t as good as some other competitors. With the second year of partnership now in progress, we should expect noticeable improvements in the camera department.

As for the hardware, the primary shooter is a 48MP Sony IMX 789 accompanied by a whopping 150° FoV ultra-wide camera with 50MP of resolution. This is much wider than most conventional smartphones with ultra-wide cameras which means you’re going to get a totally new perspective. The third camera on the rear is an 8MP telephoto lens which is a disappointment since a periscope lens is long overdue on the Pro model.

The front has a 32MP selfie shooter which is double the resolution compared to the OnePlus 9 Pro. The OnePlus 9 Pro wasn’t that great in terms of selfies and we can hope that the new sensor will bring in improvements in this regard.

The OnePlus 10 Pro is also the first smartphone from the brand to come with 10-bit color photography, extending across all three rear cameras. This allows for wider gamut coverage and fewer instances of color banding. If you care about RAW photography, the Hasselblad Pro Mode in the camera app allows for 12-bit RAW photography from all three rear cameras. There’s support for RAW+ too, which results in a RAW file and a processed JPEG file at the same time, giving you the flexibility of both formats. Then there is Movie Mode, which lets users adjust ISO, shutter speed, and other settings when video recording. Movie Mode also allows you to film in LOG without a preset picture profile.

Battery life was one area where the OnePlus 9 pro fell short. The OnePlus 10 Pro aims to improve it by bumping up the capacity to 5,000mAh, that too with even fast charging speeds. The OnePlus 10 Pro supports up to 80W SuperVOOC fast charging along with 50W AirVOOC fast wireless charging. Of course, it’s still 40W lesser than Xiaomi’s insane 120W charging tech. But, 80W is still crazy high and you can expect the phone to charge completely from a dead state in about half an hour. For those wondering, OnePlus is bundling the 80W charger inside the box.

OnePlus was known for its clean and minimal skin — OxygenOS — which has unfortunately turned into ColorOS now after the codebase merger. The OnePlus 10 Pro runs ColorOS 12 in China based on Android 12. This is normal since OnePlus phones in China have been running ColorOS for a while now. However, the global version of the phone will also more or less run ColorOS itself although OnePlus says that it will come pre-installed with OxygenOS 12. Is there even a difference between the two skins anymore?

While that’s something to debate about, what’s confirmed is that OnePlus will provide three years of platform updates to the OnePlus 10 Pro since it is the brand’s flagship device.

Just like previous OnePlus devices, the OnePlus 10 Pro also gets an in-display fingerprint reader along with the option to use face unlock. The universally loved alert slider has been retained and resides on the right edge of the phone. You get stereo speakers for media consumption so if you prefer listening to audio or watching videos via the loudspeaker instead of using a pair of headphones, you’re going to have a good experience.

That’s pretty much all there is to know about the OnePlus 10 Pro so far. It looks like a decent upgrade from the OnePlus 9 Pro but there aren’t any groundbreaking additions per se. The 80W fast charging seems nice and so does the improved camera setup. We’ll have to wait for the device to launch globally to comment on the various aspects of the device though, so stay tuned for our review of the OnePlus 10 Pro.