Ten people are living and working aboard the International Space Station today following the arrival of three Russian crewmates on Tuesday morning.

The five astronauts, three cosmonauts, and two spaceflight participants will work together on science, maintenance, and filmmaking activities until the departure of the Soyuz MS-18 crew ship on Oct. 16.

The other two NASA Flight Engineers, Megan McArthur and Shane Kimbrough, assisted Vande Hei with cargo work inside Cygnus which has been attached to the Harmony module since August. McArthur also serviced a variety of hardware throughout the day including a cordless vacuum cleaner, science rack light bulbs and a carbon dioxide monitor. Kimbrough worked on, then activated and checked out the Tranquility module's treadmill.

Flight Engineer Akihiko Hoshide of the Japan Aerospace Exploration Agency was in the cupola during the morning photographing tiny satellites deployed outside the Kibo laboratory module. The Japanese astronaut, who swapped station command with Pesquet on Monday, also assisted McArthur with the vacuum work then moved on to ventilation work inside Tranquility.

Four-time station visitor Anton Shkaplerov of Roscosmos got right to work Wednesday following his three-and-half ride to the orbiting lab on Tuesday. He unpacked cargo delivered aboard the new Soyuz MS-19 crew ship and worked on video gear and a Russian science experiment with fellow cosmonaut Oleg Novitskiy. Novitskiy then began collecting station hardware for return to Earth inside the Soyuz MS-18 spacecraft.

Immersive Exercise:A crewmember charged the Wireless VR Headset with the Pilote Headset Cable on the USB multiport in preparation for Immersive Exercise operations.The Immersive Exercise project focuses on the development of a virtual reality (VR) environment for biking sessions aboard the International Space Station (ISS). The VR equipment is interfaced with the current bicycle exerciser aboard the ISS, Cycle Ergometer with Vibration Isolation and Stabilization (CEVIS), located in the United States "Destiny" Laboratory Module. 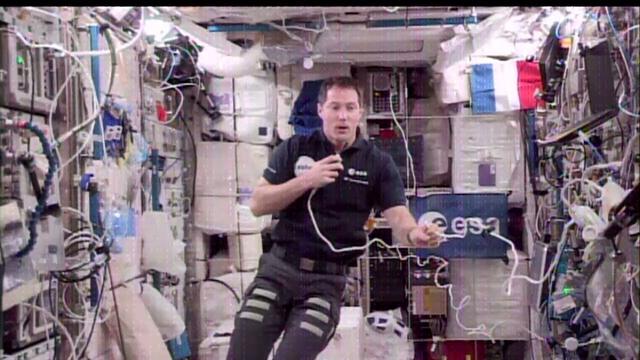 T2 Rack Center and Crewed ACO: After discovering that three of the T2 Snubbers were out of alignment yesterday, today the crew centered the rack and reperformed the crewed ACO. Both activities went nominally, and the crew took pictures and video for ground teams to review. Due to the JSL outage associated with the JSL Ethernet Connections, the crew cannot downlink the pictures or video until after the activity is completed. The crew used one of the camcorders onboard to give ground teams a preliminary look at the T2 Snubbers. Based on this preliminary look, ground teams have declared T2 GO for use, contingent on their review of the actual video and pictures once they are downlinked.

Node 3 Fwd 3 IMV Screen R&R: After the crew inspected the Node 3 Fwd 3 IMV screen, ground teams decided to schedule an R&R. The crew replaced the IMV screen with a new 3D printed screen that will allow for better airflow and easier cleaning.

*Due to live network upgrade operations, the status of tasks completed today may be inaccurate*