Rodent research, microbe sampling and Dragon packing filled the Expedition 65 crew's day at the end of the week aboard the International Space Station.

During the afternoon, McArthur swabbed and collected microbe samples from surfaces in the station's U.S. segment. She photographed the surface areas and stowed the samples for later analysis to document the types of microbes living on the orbiting lab.

Vande Hei and Commander Akihiko Hoshide of the Japan Aerospace Exploration (JAXA) spent a couple of hours on Friday loading the SpaceX Cargo Dragon resupply ship for return to Earth. The Cargo Dragon will undock from the Harmony module's forward international docking adapter on Thursday at 9:05 a.m. EDT. It will parachute to a splashdown off the coast of Florida several hours later for retrieval by SpaceX and NASA personnel.

Roscosmos cosmonauts Oleg Novitskiy and Pyotr Dubrov reviewed the procedures today and the path they will take when their Soyuz MS-18 spacecraft moves to a new port. Vande Hei will join his Russian crewmates when they undock from the Rassvet module at 8:21 a.m. on Tuesday. They will temporarily maneuver toward the station's U.S. segment where they will photograph the orbiting lab's configuration. Shortly after that, they will move back toward the Russian segment and redock to the Nauka multipurpose laboratory module at around 9 a.m.

The Russian segment's Zvezda service module fired its engines for less than a minute today slightly lowering the space station's orbit. The deorbit boost, as it is called, places the station at the correct phase ahead of the arrival of the Soyuz MS-19 crew ship and the departure of the Soyuz MS-18 crew ship in October.

ISS Deboost - Today, the ISS performed a deboost using the SM main thrusters. The purpose of this boost is to set up the conditions for 2-orbit 65S Soyuz rendezvous and 64S Soyuz landing in October. The burn duration was 47 seconds with a Delta-V of 0.66 m/s.

Sally Ride Earth Knowledge Acquired by Middle Schools (EarthKAM):A crewmember performed a shutdown of the EarthKAM software and stowed the equipment. EarthKAM allows thousands of students to photograph and examine Earth from a space crew's perspective. Using the Internet, the students control a special digital camera mounted on-board the ISS. This enables them to photograph the Earth's coastlines, mountain ranges and other geographic items of interest from the unique vantage point of space. The EarthKAM team then posts these photographs on the Internet for viewing by the public and participating classrooms around the world.

Mochii: A crewmember removed and stowed the old Mochii Microscope.Mochii is a miniature scanning electron microscope (SEM) with spectroscopy to conduct real-time, on-site imaging and compositional measurements of particles on the ISS.Such particles can cause vehicle and equipment malfunctions and threaten crew health, but currently, samples must be returned to Earth for analysis, leaving crew and vehicle at risk. Mochii also provides a powerful new analysis platform to support novel microgravity science and engineering.

Pilote:A crewmember performed Wireless VR Headset troubleshooting as the unit is used for the PILOTE experiment.To test the ergonomics of a multisensory interface for controlling robotic arms and spacecraft, it is necessary to perform the trials in microgravity.Performing the test on Earth would lead to a design of a workstation using terrestrial ergonomic principles that do not correspond to conditions experienced on a spacecraft in orbit.The Pilote investigation tests the effectiveness of novel control schemes for the remote operation of robotic arms and space vehicles, using virtual reality and a new class of user-machine interfaces based on haptics. 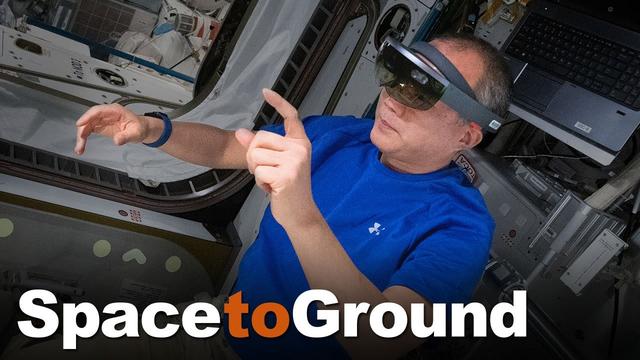 Rodent Research-Demonstration 1 (RR-D1): The crew performed Rodent Research Experiment 3 Day B operations. RR-D1 validates equipment and procedures for surgical techniques related to the wound healing process. Normal skin function and wound healing are important for maintaining good health, but spaceflight may impair healing of wounds in astronauts. Results from this investigation are intended to support design of a subsequent study on the effects of spaceflight on wound healing.

Waste and Hygiene Compartment (WHC) In Flight Maintenance (IFM): As part of regularly scheduled preventative maintenance, the crew performed a manual WHC flush tank fill.By using a post-flight analysis bag to capture any pressure relief, also known as the burp, they depressurized the flush water tank and water valve block to protect the dose pump. This pump is critical as it injects the pre-treat required to properly recycle waste urine.

International Docking Adapter (IDA) Forward Multi-Layer Insulation (MLI) Reseat: The crew reattached the two corners of the IDA Forward MLI at the Z-ring location near the IMV duct strap. MLI is designed to protect equipment from MMOD and thermal damage.

Mind The Heat! Here's How Using Heaters Can Harm Your Eyes