Five Expedition 66 crew members spent Thursday studying a variety of space phenomena while working on spacesuits and continuing the upkeep of the International Space Station.

Two cosmonauts, in the meantime, will be monitoring the late night redocking of a Russian resupply ship.

NASA Flight Engineers Shane Kimbrough and Megan McArthur, also commander and pilot of the SpaceX Crew-2 mission, split their day packing up station gear and personal items inside the Crew Dragon Endeavour spacecraft. They and fellow astronauts Akihiko Hoshide and Thomas Pesquet are due to return to Earth and splashdown off the coast of Florida in early November aboard Endeavour ending their six-and-a-half month space mission.

Kimbrough also joined NASA Flight Engineer Mark Vande Hei for ongoing spacesuit work taking place inside the U.S. Quest airlock during the morning. The duo prepared the U.S. spacesuits for an upcoming spacewalk planned for after the arrival of the SpaceX Crew-3 mission. McArthur stowed hardware and checked valves after wrapping up two days of maintenance on the orbiting lab's oxygen generation system.

The Progress 78 spacecraft, which undocked from the station Wednesday, Oct. 20, is scheduled to make an automated docking to the new module at 12:23 a.m. Friday.

The relocation will position Progress 78 to conduct leak checks of the Nauka module's propellent lines before they are used with the new module's thrusters for orientation control of the station.

Another Russian cargo freighter, Progress 79, will launch from the Baikonur Cosmodrome in Kazakhstan at 8 p.m. Wednesday, Oct. 27 (5 a.m. Thursday, Oct. 28, Baikonur time). Progress 79 launch overage on NASA TV, the agency's website, and the NASA app will begin at 7:45 p.m.

78P Undocking:Last night, the Russian cargo vehicle, 78 Progress (78P), undocked from the MRM-2 docking port. The vehicle is currently holding position approximately 120 miles from the space station. Tonight, 78P will rendezvous and dock to the MLM port at approximately 11:23 PM CT. The 78P port relocation to MLM is in support of configuration changes to enable MLM thrusters to ISS roll control and in preparation for the upcoming installation of the 6R Node Module.

Actiwatch Plus setup: The crew connected their Actiwatch Plus devices to a USB hub for charging and configuration setup, and then returned them after the activities were completed.The Actiwatch is a waterproof, nonintrusive, sleep-wake activity monitor worn on the wrist of a crewmember. The device contains a miniature uniaxial accelerometer that produces a signal as the subject moves. The data are stored in nonvolatile memory within the Actiwatch until they are downloaded for analysis.

Advanced Nano Step: The crew installed the Advanced Nano Step cartridge into the Solution Crystallization Observation Facility (SCOF), which is located in JAXA's Ryutai rack.This is the beginning of the 35-day sample growth experiment, which is planned to return on SpX-24.The Effects of Impurities on Perfection of Protein Crystals, Partition Functions, and Growth Mechanisms (Advanced Nano Step) experiment monitors and records how the incorporation of specific impurity molecules affect the development and quality of protein crystals as they grow in a quartz cell aboard the International Space Station (ISS). The crystals grown on the ISS are returned to Earth and characterized using synchrotron X-ray diffraction. The protein crystal and impurity interactions are managed and monitored jointly by both scientists on the ground and the ISS crew.

JAXA Water Recovery System (JWRS): The crew removed the old gas tube and installed a new gastrap module into the JWRS system.The JWRS generates potable water from urine.In the past on manned spacecraft, urine and wastewater were collected and stored, or vented overboard.For long-term space missions, however, water supply could become a limiting factor.Demonstrating the function of this water recovery system on orbit contributes to updating the Environmental Control and Life Support System (ECLSS) to support astronauts on the space station and future exploration missions. 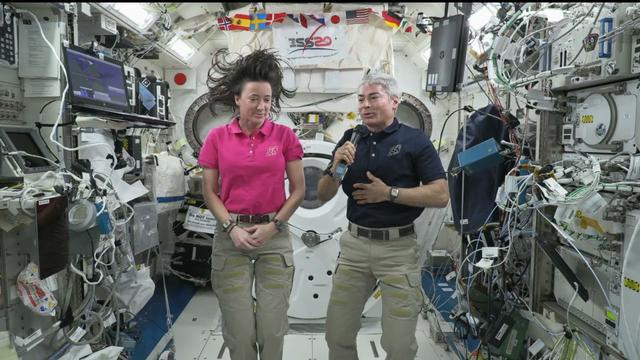 Pilote: Using the Virtual Reality (VR) headset, a spacemouse and a haptic device, the crew performed a Pilote science session.Although the VR headset image was still drifting to some extent, the Pilote science session was still able to be at least partially performed.The Pilote investigation tests the effectiveness of novel control schemes for the remote operation of robotic arms and space vehicles, using virtual reality and a new class of user-machine interfaces based on haptics.Performing the test on Earth would lead to a design of a workstation using terrestrial ergonomic principles that do not correspond to conditions experienced on a spacecraft in orbit.

Plasma Kristall-4:The crew located and gathered the data disks which will be used for the investigation and reviewed the experiment campaign familiarization material.Plasma Krystall-4 (PK-4) is a scientific collaboration between the European Space Agency (ESA) and the Russian Federal Space Agency (Roscosmos), performing research in the field of Complex Plasmas:low temperature gaseous mixtures composed of ionized gas, neutral gas, and micron-sized particles.The main feature of the PK-4 facility (in comparison with its predecessors onboard the ISS, such as PK-3 and PK-3+) is a new concept of its discharge chamber. Application of a combined discharge that consists of a direct current discharge, inductive HF discharge and capacitive HF discharge allows varying the topology of studied plasma-dust formations in a wide range.

Ring Sheared Drop: The crew removed the sample test cell from the RSD experiment hardware. This is one of the activities to help determine the source of resistance for the rotating ring.The Ring Sheared Drop investigation examines the formation and flow of amyloids without the complications associated with the solid walls of a container, because in microgravity, surface tension provides containment of the liquid.Fibrous, extracellular protein deposits found in organs and tissues; amyloids are associated with neurodegenerative diseases such as Alzheimer's.Results could contribute to better understanding of these diseases as well as to development of advanced materials.

Toilet: The crew took detailed photos of the Toilet system and associated consumables and filled out a questionnaire.The Toilet System is an Exploration Tech Demo that has evolved into a permanent USOS system.The Toilet has the same basic design as the Orion Universal Waste Management System (UWMS).The Toilet System will be the primary WMS for USOS for up to 90-crew-days and interfaces with the Urine Transfer System (UTS) to allow concurrent WHC/Toilet operations.

Extravehicular Activity (EVA) External Mobility Unit (EMU) Resize:The crew resized EVA EMUs 3015 and 3004 in support of upcoming EVAs. The crew will continue to work on Road to EVA activities over the coming weeks.

KU Comm Unit 2 (KCU2) Pin Repair:Recently, the crew installed a new router and connected the JSL cables as part of the JSL v14 upgrades. After the activity was complete, ground teams discovered that there was a bad connection between the Lab Router and KCU2. As part of troubleshooting steps, the crew inspected the cabling and noticed that Pin 5 & Pin 6 on JSL Data Cable (W3034) Connector P5B were damaged. Today, the crew re-engaged pin 5 by removing the connector backshell and pushing it from the back of the P5B connector. The crew was also able to fix pin 6 by removing the pin through the back of the connector, cutting the wire, attaching a new pin and re-seating the pin into the connector. Installation and check out will be added to tomorrow's timeline.