Microsoft’s Your Phone app makes it easy to link your Android device to your PC. It’s great for replying to text messages, making and receiving calls, and more. And the experience is going to get even better, with a new feature arriving that will add device indicators for controlling your phone’s settings.

According to ALumia, Microsoft is gearing up to release an update to the Your Phone app that will allow users to activate and deactivate features on their phone, such as Wi-Fi, Bluetooth, and Do Not Disturb. Before, users could see whether these features were active, but couldn’t interact with them. 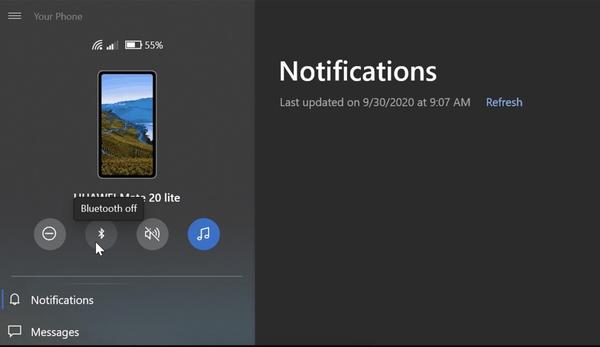 The new Your Phone app feature in action courtesy of ALumia.

“Here, this feature will soon be introduced by the Your Phone team, which in recent months has been working to introduce the new feature called ‘Indicator management,’” ALumia said. “How does it work? As soon as you receive this function, the Your Phone application will show you under the image of your smartphone four new buttons that will allow you to activate or deactivate the bluetooth, the ringtone / vibration, the audio player (for music) and the mode do not disturb simply with a click, without necessarily having to keep your smartphone at hand.”

The indicators function is expected to be gradually rolled out to users, so be on the lookout over the next few weeks. For those who do see it (v1.21012.195.0+), controlling your phone from your PC is about to get a lot easier.

Microsoft has brought a lot of helpful features to the Your Phone app over the last several months. The app introduced the ability to run multiple Android apps on select devices back in November. Before that, another feature was being tested that introduced a “sent from phone” option for sharing links, images, and notes.

New Year 2022 resolution is to be fitter? 5 apps that will help you start the fitness journey