Apple announced the iPhone 7 and 7 Plus in San Francisco on Wednesday.

As predicted, the new iPhones closely resemble the iPhone 6S and 6S Plus and do not have a 3.5mm headphone jack (a first on any iPhone).

A new Jet Black model has a brand new glossy enclosure that does away with the antenna lines.

There's also a new regular Black model along with the typical rose gold, silver and gold colors. These are made of aluminum.

The home button is touch-sensitive and builds on the Force Touch trackpads Apple includes on its new MacBooks, meaning it's not a physical button that can be pressed, but one that simulates a button press.

The screens are also 25 percent brighter and deliver a wider range of colors and increased contrast.

Apple bumped iSight camera's resolution from 8 megapixels to 12 megapixels last year on the iPhone 6S and 6S Plus.

For the new iPhones, the resolution remains the same at 12 megapixels, but the iPhone 7 finally gets optical image stabilization (a first on the smaller model) and the larger iPhone 7 Plus has two 12-megapixel cameras; one has a wide-angle lens and the other is a telephoto lens. 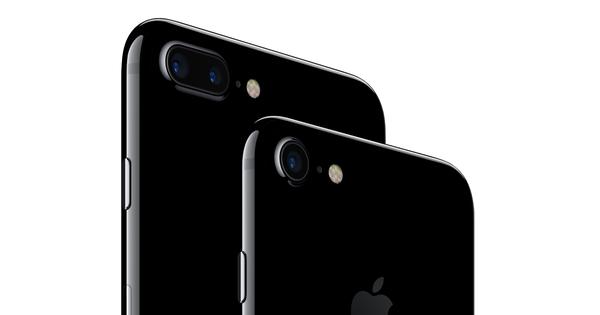 With the two cameras, the iPhone 7 Plus can zoom up to 2x via optical zoom between the two lenses and up to 10x via digital zoom.

The new camera is comprised of a new 6-element lens with larger f/1.8 aperture which helps take even better photos in low-light situations, putting it on par with some of the best Android phone cameras.

The cameras are also a lot faster to autofocus and shoot. On the larger iPhone 7 Plus, the camera is capable of capturing photos with bokeh (blurred out backgrounds) with shallower depth of field.

The front-facing FaceTime camera is now 7-megapixels (up from 5-megapixels).

Ever since Apple started designing its own processors, each new iPhone has seen performance increase exponentially even without requiring more than dual cores. The new iPhones are powered by Apple's new A10 Fusion processor, which is 40 percent faster performance than the A9 in the iPhone 6S.

The new 6-core graphics chip is 50 percent faster than the A9 processor, which should allow for even high-performance games in tandem with Apple's Metal API.

The new iPhones are IP67 water and dust-resistant. That's good enough to be submerged in up to 3.2 feet of water for up to 30 minutes.

For the first time the iPhone has stereo speakers, which can output 50 percent louder sound. One speaker is in the earpiece and the other on the bottom.

Yep, the headphone jack is gone. Deader than dead.

iPhone 7 and 7 Plus users will need to use Lightning-based headphones, which will be included in the box.

Every new iPhone will also include a Lightning-to-3.5mm headphone jack dongle in the box that work with existing headphones.

Not into any of those two options? Apple's got new wireless AirPods, its new wireless earbuds that are basically EarPods sans wires.

Pre-orders start on Sept. 9 and devices ship on Sept. 16.

Installment plans will also be available: