Working out isn’t everyone’s idea of a good time. Some need a little more motivation to work up a sweat, and that’s where these fitness-focused video games excel. From mobile to VR, there’s something for every platform and activity.

Get Motivated Walking with Pokémon and PikminLove Dancing? Try Just Dance or Dance CentralTurn Exercise Into an RPG With Ring Fit AdventureGet Sweaty in VR With Beat SaberTeam Up With Massively Multiplayer Cycling App ZwiftBreak Out Older Consoles and Accessories TooMore Ways to Get Fit

Get Motivated Walking with Pokémon and Pikmin

For many, getting up and moving around a bit is the first step to better fitness. Most health experts recommend around 10,000 steps per day as a goal for most people to aim for, or work up to. If you’re already doing 10,000 steps, you might want to up this target.

Games like Pokémon GO and Pikmin Bloom are both augmented reality games in which the aim is to move around. While Pokémon is more about discovering creatures in the wild and battling for gyms based on real-world landmarks, Pikmin Bloom is more about simply moving around and takes on a much more passive guise.

You should give Pokémon GO a shot if you value a more traditional video game experience where technique and competition are good motivators. Moving around the world allows you to collect items from “PokéStops” while hunting for wild Pokémon, some of which are only found at certain times of day and in different environments. The app is available for iPhone and Android users, and is free to play.

Pikmin Bloom rewards users for simply moving around outside. You grow Pikmin from seedlings, which then join you on your travels. There are mushrooms dotted around the map which you must clear using your squad of Pikmin. At the end of the day, you can check out your route, pictures you took, and collect rewards. Pikmin Bloom is also free to play on iPhone and Android.

Dancing can be both fun and physically taxing. Though it seems like dancing video games may have had their moment sometime in the mid-2000s, there are still a few big names releasing titles that use new control methods to make the genre as accessible and exciting as ever.

Ubisoft’s Just Dance is arguably the most successful, with annual releases for most consoles including the Nintendo Switch, Xbox family, both PlayStation 4 and PlayStation 5. Each release includes around 40 tracks, plus you can subscribe to the Just Dance Unlimited service to get access to hundreds more.

While Just Dance previously relied on motion controls for consoles like the Wii and Microsoft’s ill-fated Kinect, you can now play with a smartphone app held in your right hand (or use standard controllers on Sony and Nintendo platforms). The game features a “Sweat” mode designed for working out, allowing you to count the calories you’ve burned in a session.

The series has been expanded to mobile-only with Just Dance Now, which removes the need for a console in place of a web browser, Mac, Apple TV, Chromecast, or tablet.

Harmonix’s Dance Central was previously a big name in the dancing video game space, but the series hasn’t seen a release since 2019’s VR title of the same name. The game is available on the Oculus Quest and Oculus Rift, with a positive rating despite its age. If you want a VR dance title, Dance Central may be worth a shot.

Turn Exercise Into an RPG With Ring Fit Adventure

Ring Fit Adventure is a purpose-built RPG with a focus on fitness for the Nintendo Switch. It uses two adapters that are bundled with the game cartridge: a ring (Ring-Con) and a leg strap into which the left and right Joy-Con are placed. It works with both “standard” Nintendo Switch models that use detachable Joy-Con, but Switch Lite owners will need a separate pair of Joy-Con to play.

The game incorporates over 60 real-life exercises like jogging on the spot, sprinting, and strength-building exercises that require you to squeeze the Ring-Con. Working up a sweat translates into actions on screen, which have you traversing a path, fighting bosses, or tackling minigames in smaller bursts.

The game is aimed at all fitness levels and includes the ability to check your estimated pulse rate using the infrared sensor in the right Joy-Con, plus track calories burned and weight loss over time. Since its launch, the game has had a free update that introduces a rhythm mode, jogging mode, and more customization options. 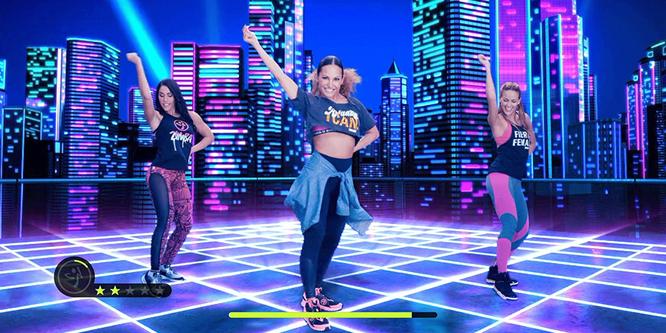 RELATED: How to Decide Which Nintendo Switch Is Right for You

Get Sweaty in VR With Beat Saber

Virtual reality (VR) is still edging its way toward mainstream adoption. For many, VR is prohibitively expensive and takes up too much room but budget headsets like the Oculus Quest 2 have made the medium more accessible than ever before. Sony’s upcoming PlayStation VR 2 should push the envelope even further with its lofty technical specifications.

If you’ve already invested in a VR setup (or are looking for something to justify the expense) rhythm action game Beat Saber should be on your radar. The game has you hitting red and blue notes with corresponding sabers, with varying levels of difficulty from beginner right up to expert.

Not only is the game a blast, but it’s also a sure-fire way of getting your heart rate up. The biggest downside to this is that being strapped into a VR headset can make for a sweaty experience. You’ll also need to be aware of your surroundings since flailing your arms without being able to see what you’re doing in the “real” world can have disastrous consequences.

Zwift doesn’t refer to itself as a game, but rather a massively multiplayer cycling app. By connecting your bike to a smart trainer, then downloading Zwift and connecting everything (7-day free trial included) you can translate your movements on the bike into movements on the app. The app can also be used by runners who have a “RunPod” or compatible treadmill.

Zwift is a connected experience, which means you can run or ride with other people using the app and friends who you know in real life. Up to 100 people can get together in a ride, with a results screen a “late join” feature that makes the experience both competitive and accessible.

The biggest downside to Zwift is that you need dedicated hardware to use it. For cyclists, this means a bike and a smart trainer which can be quite an investment. You’ll also need to move your bike onto your trainer each time you want to use Zwift. This requirement has led many dedicated cyclists to buy a “Zwift bike” which remains permanently connected for such a reason, particularly during the COVID-19 pandemic.

Zwift is compatible with iOS, Android, macOS, tvOS, and Windows as a free download, then costs $14.99 per month plus sales tax.

Break Out Older Consoles and Accessories Too

It’s a shame but some of the best fitness video game experiences are from a bygone era. Take for example Nintendo’s Wii Fit balance board, many of which can be found in thrift stores or on eBay at bargain prices. The game features yoga, strength training, cardio, and balance mini-games designed to improve fitness and coordination. Best of all you can use it with the original Wii and the follow-up Wii U.

Microsoft’s Kinect was another promising exercise accessory, though games released for the platform never lived up to the promise. In particular, the Kinect versions of games like Dance Central were unique in that they didn’t require you to hold a controller in your hand and instead measured your success level using the Kinect sensor. The original Kinect is available for the Xbox 360, and Microsoft released a follow-up with the original “cable box” Xbox One which was later dropped.

Going back even further are games like Dance Dance Revolution, which were (and still are) arguably at their best in the arcades. These games often relied on a dance mat that was plugged into the console via a standard controller port, allowing the arcade experience to be somewhat replicated at home. The last DDR releases were for the PlayStation 3 and Xbox 360, though it’s probably easier to find games and accessories produced during the PlayStation 2 era now.

Though these titles are older and rely on older hardware, they can still help you work up a sweat and so might be worth keeping an eye out for second hand (or fetching down from the attic).

More Ways to Get Fit

If you’re looking to lose weight or just improve fitness in general, make the most of the devices you have available to you. A smartwatch can be used to monitor workouts and motivate you to move and exercise more. You can even compete with others for an added challenge.

Got an iPhone? Learn how to use your Apple smartphone to help you lose weight too.

RELATED: How a Smartwatch Can Help You Train for a 5K

Nine of the best fitness trackers